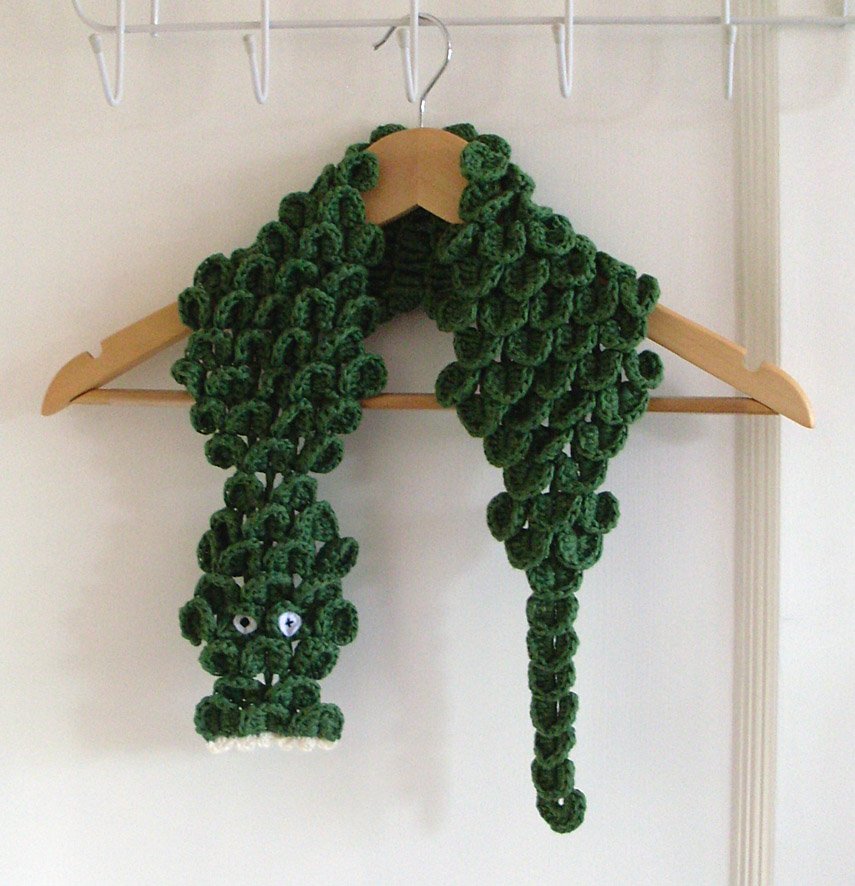 I saw a pattern on Ravelry several months back for a crocodile scarf – I bookmarked it and kept checking back but it always just said “pattern coming soon”. And now it has disappeared so I decided to take matters into my own hands! I looked at a few videos of the crocodile stitch but I find videos hard to follow because everyone’s crochet style is different and they hold the work at different angles, twist the hook around different ways. I find written instructions with diagrams and photos of the steps much easier to follow but I didn’t find much of that (especially for left-handers) so I muddled through as best I could and wrote it out in detail as I completed each bit.

The starting point is the diagram below – I started at the tail and figured out how to increase as I went along.

Here is a photo of the body in progress. I looked at a few different websites explaining the crocodile stitch and, while everyone seems to do it slightly differently, once I got my head around the general idea it was actually very easy. So for everyone out there like me, who prefers written instructions and detailed photos, here is a detailed photo tutorial of how I created this scarf….

Crochet terms are American in red and then in English in green afterwards. As I’m left-handed all the photos show the steps as seen by a left-handed crocheter – I’ll try to give written instructions for both left and right-handers but if you’re right-handed and struggling, try flipping the photos and if you’re still confused then leave a comment and I’ll try to help.

Some of the instructions I watched flipped the work back and forth to create the scales however I found it easier to always have the front facing me and spin the work. Experiment and do whatever works best for you.

I am using bamboo ribbon yarn that I’m not sure of the weight of and a 5mm hook which makes each scale ~2.5cm (1 inch) in width and height.

Step 4. ch1 and turn the work 180 degrees anticlockwise (clockwise if you’re right-handed) and crochet 5dc [5tr] around the initial chains from step 1.

Step 6. turn 90 degrees anticlockwise (clockwise if you’re right-handed) and crochet 5dc [5tr] around the dc [tr] from the previous step.

Repeat steps 5-7 until the tail is as long as you would like it. My scarf has 8 scales in the tail. Now we need to increase up to the width of the main body of the scarf….

Step 11. We now need to attach this scale to the single treble from step 9. Turn the work 180 degrees so it is as shown in the photo below and insert the hook under the single dc [tr] as shown by the red arrow and slip 1 stitch.

Step 12. Keeping the work in this orientation follow steps 6 & 7 again to create a second scale around the chains and stitches on the other side (this can be a little awkward the first few times – keep going!).

We are now going to increase again on the next row.

Your work should now look like the photo below.

Now you know how to increase and decrease you can use the steps above to make the crocodile scarf as follows (if you have followed all the steps above you will have just completed row 4 below).

I am using bamboo ribbon yarn that I’m not sure of the weight of (but it’s pretty chunky) and a 5mm hook which makes each scale ~2.5cm (1 inch) in width and height.

Continue alternating between 4 and 5 scales to a row until the body of the scarf is as long as you want it.

If you’re using thin yarn then I would recommend continuing until the work is normal scarf length – long enough to wrap around your neck at least once. If like me you are using quite thick yarn then the resulting scarf will be too thick to wrap all the way around. Instead I made a “tab” and sewed it to the underside of the head then you can pull the tail section through to secure the scarf wrapped just around the back of the neck (as shown below).

For the tab chain about 15 and just complete a couple of rows of double crochet – it doesn’t need to be pretty – it won’t be seen. Then sew it to the underside of the head approximately where the eyes will be.

Anyway whichever method you choose you first need to know how to complete the head!

Fasten off and weave in ends.

With much thinner white yarn and a small hook attach to the edge of the final row of scales. There are no proper stitches here so please excuse the lengthy descriptions of where to complete stitches – I hope it makes sense!

Step 1. chain 1 and sc [dc] into the same place you attached the yarn

Step 4. complete 5dc [5tr] into somewhere halfway between the centre of the scale and the far edge of the scale

I tried a few different styles of safety eyes but they all made him look a bit sinister so in the end I used white felt and black thread. Experiment with the placement of the eyes to give him different expressions. Mine are placed on the middle two scales of the 4th row from the end.

Copyright & Legal Stuff: I’m happy for you to sell items you make from this pattern but the images and words are mine – I worked hard writing & testing & photographing so don’t copy or distribute any part of this pattern. If you want to share it then link to this page. Thanks & happy crocheting